We are delivering our fitness and nutrition coaching online to stop the spread of COVID-19. Learn More

HERE'S WHAT'S HAPPENING IN OUR COMMUNITY! 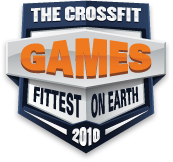 On July 16th to 18th, 2010, some of the fittest people on earth will compete in the CrossFit Games 2010, including a team of 6 athletes from CrossFit Winnipeg competing in the Affiliate Cup team competition.

What are the CrossFit Games?

The CrossFit Games are the ultimate test of fitness. It’s a grueling three-day competition in which the world’s fittest athletes compete in a variety of workouts. What are the workouts? Each year they change, and the details of them are not announced until a couple days before the event. This means that all year long, the athletes are training for a competition whose format is almost completely a mystery.

The 2010 Games will have five main competitions: Men’s Individual, Women’s Individual, Affiliate Cup Teams, Men’s Masters and Women’s Masters (over 50). The winners of the individual competitions will each receive $25,000 cash, sponsored by PROGENEX. There will also be many cash and material prizes for the other winners and top performers.

Qualifying for the 2010 CrossFit Games

The 2010 Games are limited to 50 men and 50 women, all of whom need to qualify to enter. The top five men and women from the 2009 Games are automatically qualified. All past champions are automatically qualified if they wish to compete. The other 43-45 competitors have to qualify in their Regional Qualifier. There are 13 Regionals around the world, and each Regional will send the top 1 – 7 athletes (men and women) to the Games, depending on the size of the Regional.

History of the CrossFit Games

Approximately 74 men and 72 women began the first event. All had qualified to enter by one of several means: winning any prior year’s Games, being one of the top five finishers from 2008, or by placing high enough in one of the 19 qualifying events in the spring of 2009. Scoring was based on relative finish, so the fewer points the better. The bottom ten athletes (those with the most points) were eliminated from the competition after both the second and fourth events. Only the top 16 men and women (each) continued on to Sunday’s events.

The team Affiliate Cup was held on Friday, July 10th and Sunday July 12th. It was exclusively team workouts, and open to all teams who registered in time (no qualifying required). In the end, 96 teams competed. Each event required two men and two women to compete, but they could select those four from up to six athletes on the team.

Saturday: (workouts performed in any order throughout the day)

Every second counted. Overall winner was the athlete with the lowest combined time for all four workouts. Jason Khalipa won the men’s competition and Caity Matter won the women’s. CrossFit Oakland won the Affiliate Cup. To see the final results for 2008, click here. For the 2008 CrossFit Games website, which documented the event thoroughly, click here.

A hopper workout that was literally determined at random (it ended up being row, push jerks and pullups)

A 3K off trail hill run

The scoring was based on points per finishing order and the winner had the highest total points. James Fitzgerald won the men’s competition and Jolie Gentry won the women’s. CrossFit Santa Cruz won the Affiliate Cup. For a review of the 2007 Games, read Dave Castro’s CrossFit Journal article Reading Between the Lines.

Hidden Financial Benefits of Getting in Shape

First Time For Everything

Talk with a coach about your goals, get the plan to achieve them.

Click here to schedule a Free Intro. During your intro, we'll make a plan to help you reach your goals.

fill out the form below to get started!

Take the first step towards getting the results you want!